How Kids Can Learn from World War II Radio Programs.

The following is an updated post I wrote years ago for an experimental blog on instructional technology and the idea to connect yesterday's media for today's kids.

When you were in school, many of the courses that you had to take may have seen miles away from your everyday life and interest.  When the lesson did seem to connect to you, suddenly the information had more meaning. Ask yourself this; when your teachers or professors tried to explain the many great wars of history, did you remember the statistics, or did you memorize the posters, music, and images of those events.

History can be exciting with movies, audio recordings, movie posters, book covers, reenactments of forgotten history facts, and exhibit items from and about different time periods. Visuals, audios, and dramatizations can give you a better understanding of the beliefs, attitudes, fears, hope, and dreams of a past generation.

In this post, I will present random ideas about how to use digital and traditional media to enhance a history lesson for learners of all ages.

Every holiday season millions of people love to watch "A Christmas Story" (1983) a movie based on the works of Jean Shepherd. Taking place in a mixture of the 1930s & 1940s culture a viewer can pick up on the popular entertainment of the times. Little Ralphie's favorite juvenile radio programs like Red Ryder, The Lone Ranger, and Little Orphan Annie are mentioned and we get a feel for how exciting and a huge part of life they were for him. A child today can get this feeling if they heard one of these programs in context (before television, first electric broadcast media in the home, decoder rings, etc.)
Young Americans - Do Your Part For The War Effort

Even before the attack on Pearl Harbor on December 7th, 1941, wartime propaganda ideas spread to every medium:  comic books, box-office blockbusters, songs, and radio "the theater of the imagination". 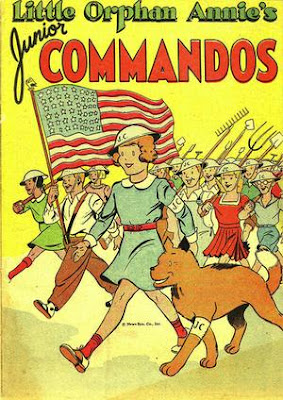 Almost every popular hero of the time faced off against the Axis powers. Radio and comic strip heroine Little Orphan Annie led the fictional Junior Commandos. This concept of young people making a difference on the home front was so popular that many local Junior Commando units were initiated throughout the country. The Associated Negro Press praised Annie's creator, cartoonist Harold Grey, for including an African American in the comic version. The projects that young Americans contributed to included metal scrap drives and paper collections to add to resources overseas.  An idea like the Junior Commandos can lead to a project in which young learners compare volunteering of the past to the present and create a new community service project.
Episodes of the Annie radio series are scarce, and none broadcast after Pearl Harbor are available. However, episodes of other radio programs geared toward young audiences like The Green Hornet, and Don Winslow of the Navy, are available. Some of these broadcasts include announcements for public service to help the American war effort. Listening to surviving episodes of these programs can transport a listener back to the Golden Age of Radio and a child's world of World War II.
HERE ARE SOME DISCUSSION TOPICS.
TO USE WITH OTHER TIME PERIODS.
HOW TO INTEGRATE WITH MODERN TECHNOLOGY
Many radio programs are in the public domain (although for the best quality it much better to order from a radio drama company).  The Internet Archive http://www.archive.org/ has hundreds of wartime broadcasts including news broadcasts, music, and speeches which can be downloaded and incorporated into a presentation, or a blog.

It has been a long time since I did any anniversary recognitions, and I could not let this August-September go by without any.

August 19, 1950 Animal Clinic with Dr. Wesley A. Young and Acrobat Ranch the first original network television shows on a Saturday morning for kids debut. A very small start for the institution of Saturday Morning kids blocks on TV. One episode of Acrobat Ranch still exists and can be seen online.

September 05, 1950 - The Cisco Kid with Duncan Renaldo and Leo Carrillo began a colorful run on TV that continues in some markets (and apps) to this day.

September 11, 1950 - The famous comic strip hero "Dick Tracy" enters the TV market. Ralph Byrd continues in the role of the square jaw detective after 13 years in serials and "B" pictures. Also premiering that were The Adventures of Paddy the Pelican considered one of TV's worst cartoons.

September 18, 1950 - The syndicated "Telecomics" move to NBC as the NBC Comics with the adventures of "Danny March" "Space Barton", "Kid Champion" and "Johnny and Mr. Do-Right". Fortunately, at least one segment of these 4 series can be seen today. Check out an episode of "Space Barton" below.

September 12, 1970. The Hanna Barbera classic "Josie and the Pussycats" debuts on CBS. The series is still notable for being the first Saturday Morning cartoon to have 3 female lead characters (Josie, Melody, and Valerie) and the first to have an African-American female lead character. Also debuting on CBS that same morning "The Harlem Globetrotters" the first all Black character animated series, the educational series "In the Know", and cartoon competition from Filmation with Archie's Funhouse and Sabrina and the Groovy Ghoulies. NBC and ABC shows will have to wait for another post.

Posted by Archivebuilder at 6:00 AM No comments:

Today's kids watch and listen to hundreds of programs on TV and smartphones, but 99 years ago, there was only ONE program for them, and it was on the "radio-phone". Children have written fan letters, and now tweets, to their favorite programs and stars as long as mass media has existed. Thanks to digital collections, it is possible to read kids' letters from the first children's program in all broadcast media, "The Man In The Moon".

"The Man in the Moon" was a fantasy bedtime storytelling program that delighted thousands of American children in the infancy of radio broadcasting. This program was broadcast from WJZ* in Newark, New Jersey beginning in October 1921. At that time WJZ was the radio station of the Newark Sunday Call newspaper. The new storytime program was originally supposed to feature the program's writer, author Josephine Lawrence who had a children's page in the Newark Sunday Call.

According to a famous behind the scenes story by WJZ announcer Tommy Cowan, Lawrence fainted while trying to climb the 15-foot ladder that led to the WJZ radio station before showtime...the ladder went through a whole in a factory roof. A Newark Morning Call reporter named William F. B. McNeary (1891-1934) was asked to step in. The audience was expecting a storytelling lady, not a man, so a new name was needed. A quick glance at the moon in the night sky and Cowan named McNeary the "Man In the Moon".

McNeary would greet the children with a line like "Hello Children Are you listening? It is the Man-in-the-Moon talking. What do you suppose I saw today." Children loved the Man In the Moon, as evidenced by reading several of the letters published in the Sunday Call. The program was popular enough for a full page devoted to these letters, as well as stories and from "The Man In The Moon." Thanks to Google Newspapers it is possible to study these letters. Below in this blog article are 3 samples from two newspaper editions. Keep in mind, that these youngsters, were the very first generation to have an electronic device in the home that could receive any signal from a broadcaster.

Dear Mr. Man in the Moon,

Every Tuesday and Friday night I listen to your stories. Where do you keep all the animals I heard tonight? I would like to see them. I think the stories are fine. I would like to hear one every night. I always clap my hand, but I don't think you hear me.

Dear Mr. Man in the Moon,

My daddy has made a wireless set for me, so I want to let you know how much I like your stories and I hope you name a little star for me, as I am only a little girl. My name is Helen Merz, and would like to hear you mention my name over the wireless some night. Good Night, Mr. Man in the Moon, I am going to bed now.

We enjoyed listening to the Man in the Moon's story tonight and would greatly appreciate it if you would kindly mention our children who are attentive listeners --- Helen Maybury, aged 5, who is a lover of all children's stories, and her brother, Sherman Maybury, aged 9, who does not like to go to bed nights without hearing a bedtime story, and their cousin, Gordon Slater, 4 years old, who has a large fire engine which he rides and enjoys, and his sister Sally Slater, aged 3, who would be happy at anything you might say to her.

Mrs. John G. Slater,
187 Waverly Avenue, Brooklyn, N. Y.
Use this link, for more from the March 12, 1922 edition, of the Newark Sunday Call.
It is not known if McNeary personally answered these letters, and it is hoped that his papers or correspondence still exist in an archive or family collection.