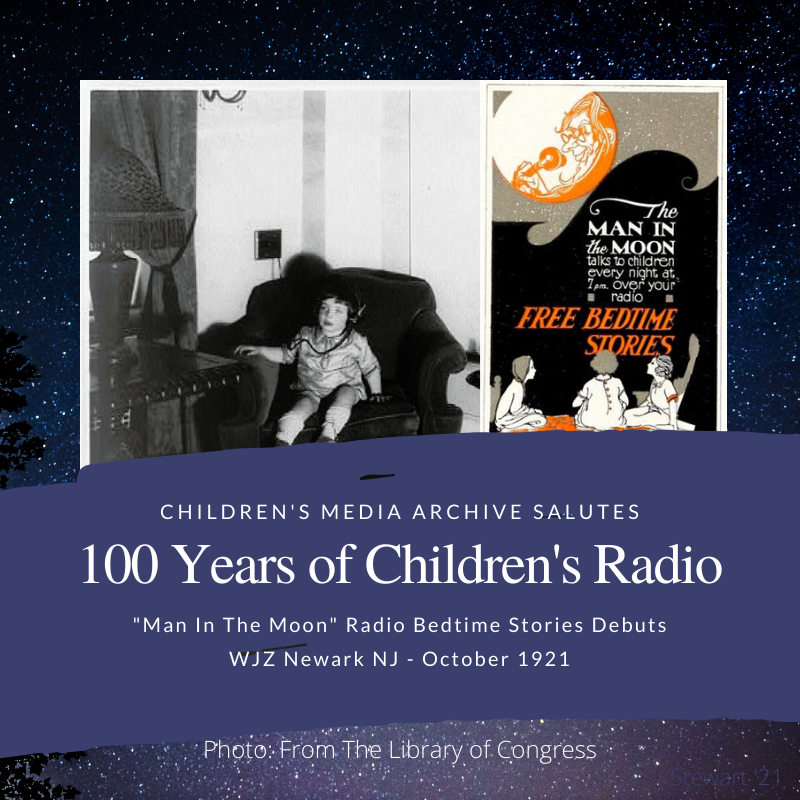 Sometime between October 1 and October 5, 1921, a newspaper editor named William F. B. McNeary climbed a 15 ft ladder, entered the rooftop radio studio of station WJZ in Newark, New Jersey and read a bedtime story by writer Josephine Lawrence over the microphone as the "Man In The Moon". This was the beginning of the first radio series constructed specifically for children. Childhood has been tremendously different ever since.
Today 100 years later children have access to more hours of broadcast and streaming media than they could possibly consume in a lifetime. Yet it all started with one program over the radio. In reflection of this milestone, more histories of pioneering radio and television juvenile series will be explored in future blog posts and videos from the Children's Media Archive.
Posted by Archivebuilder at 12:19 AM No comments:

From The Archives: A Quiz Kids Radio Postcard 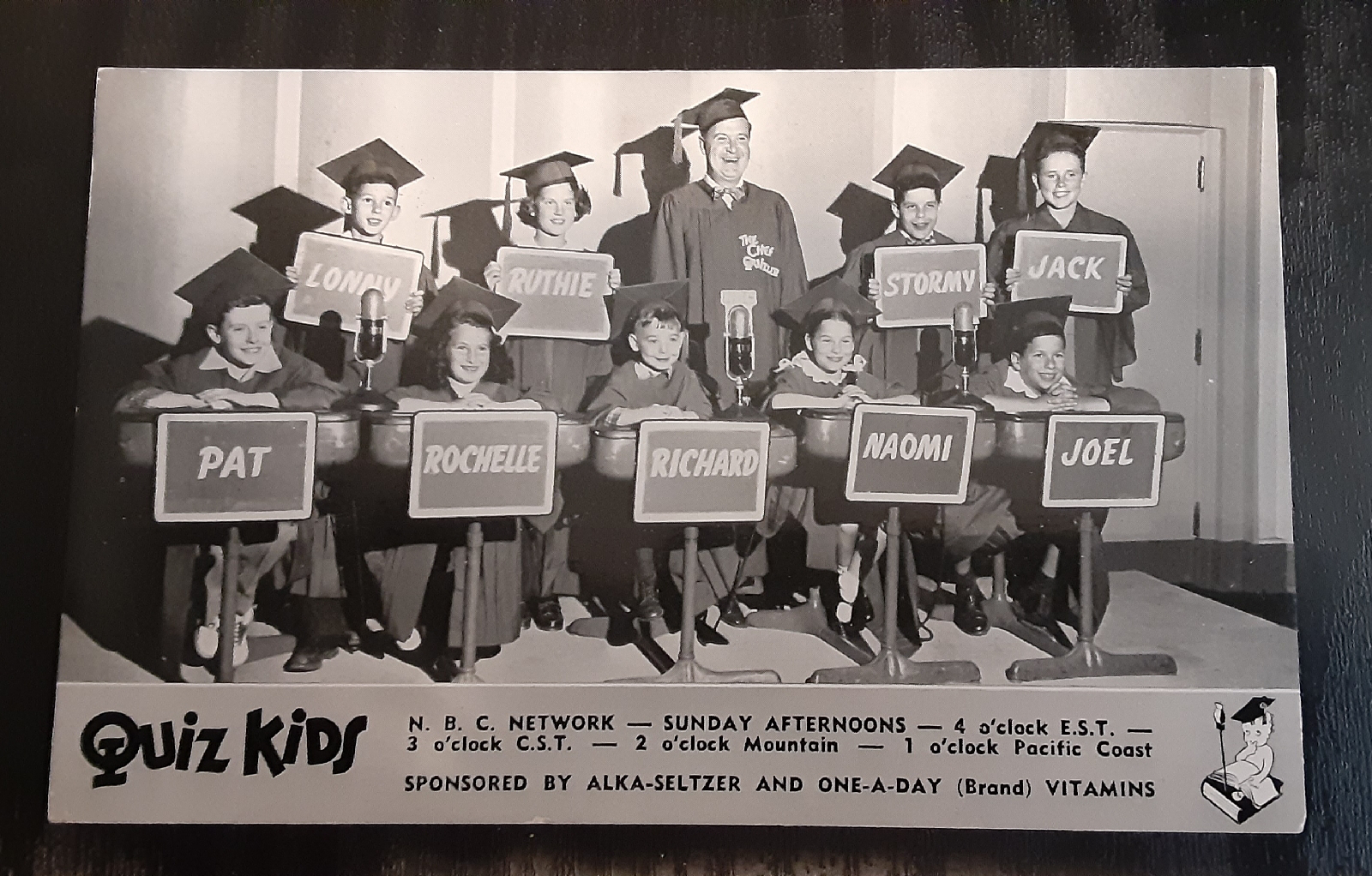 Above and below is a front and back view of a vintage postcard from the classic radio series "Quiz Kids" (1940-1953). Dated some time in the 1940s, this postcard was a special Christmas gift from my wife. 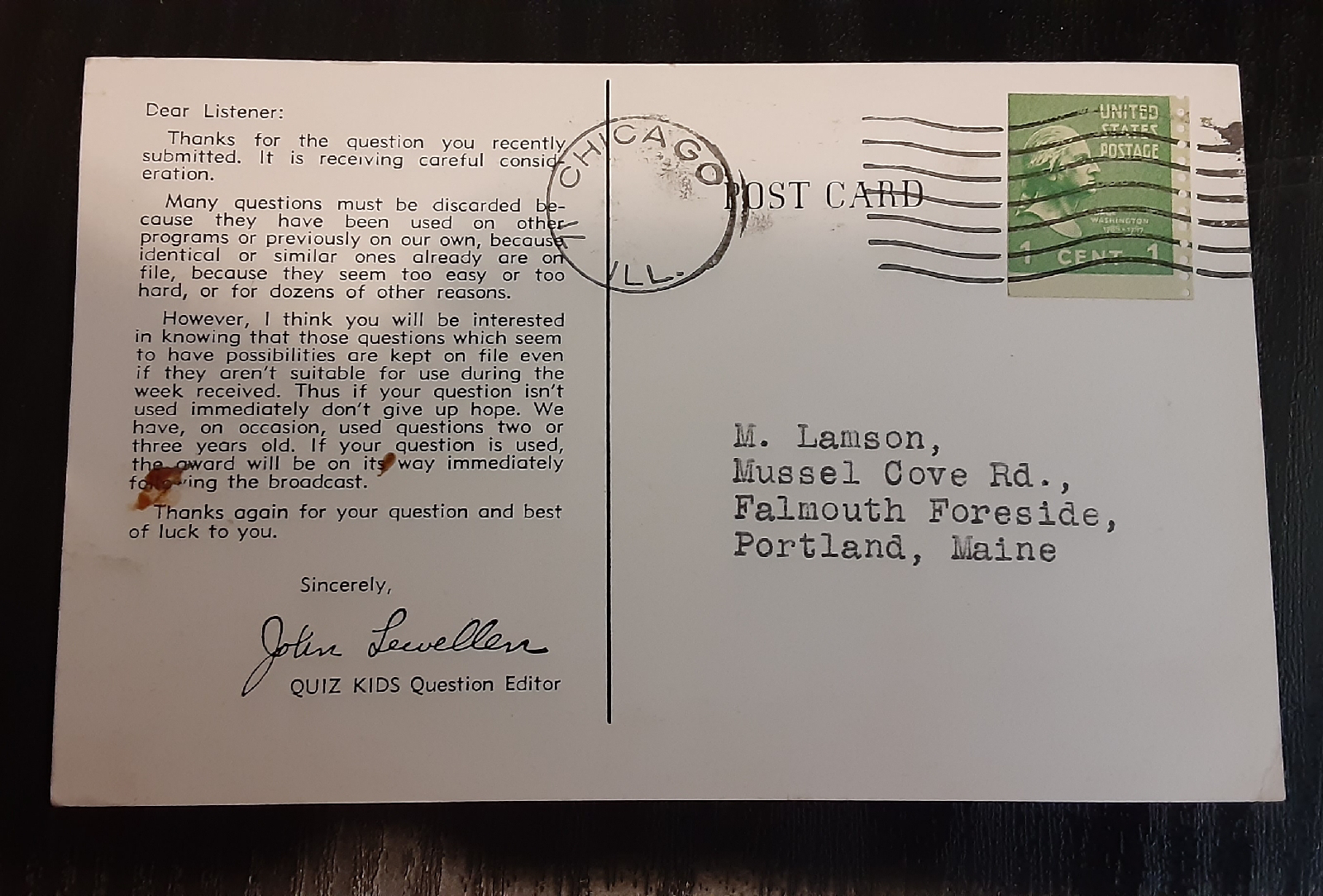 Posted by Archivebuilder at 9:54 AM No comments: 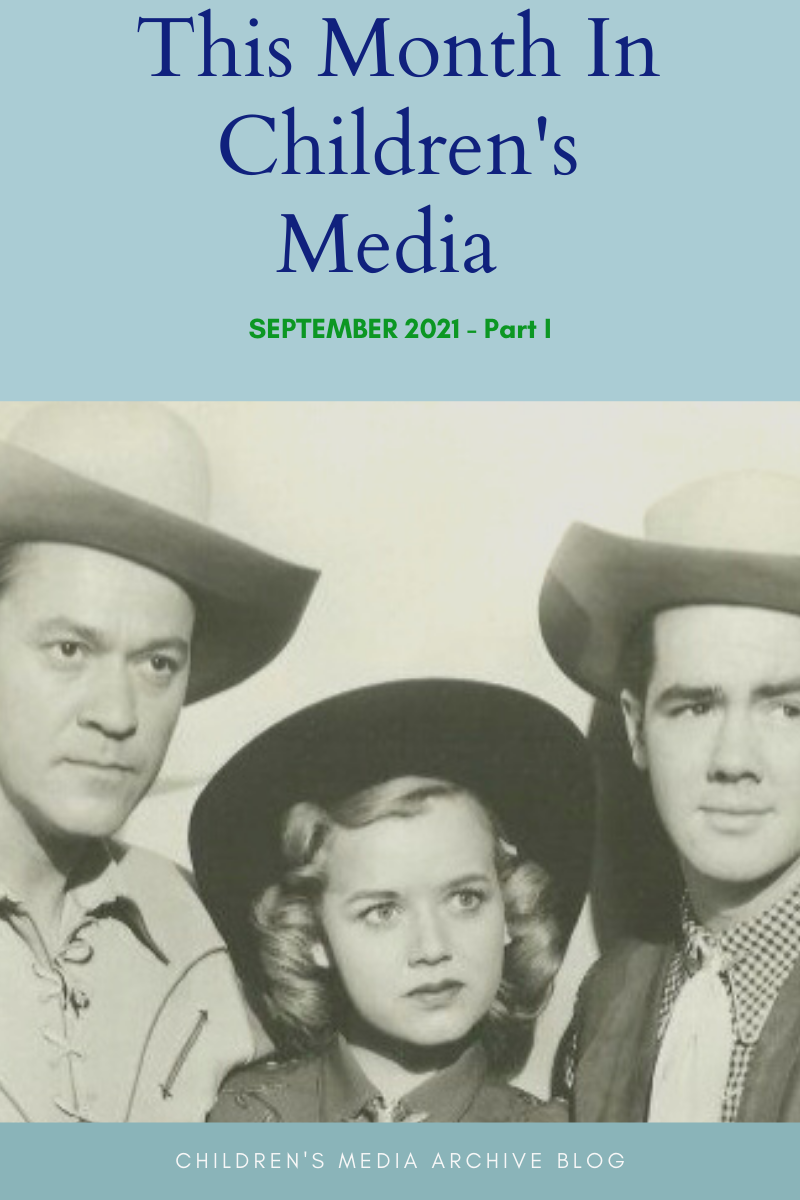 It has been over a year since I posted a feature based on children's media anniversaries. September being the traditional fall season debut month makes it a great time to restart.
70 Years Ago - September 16, 1951. The television adaptation of radio's "Sky King" debuted on ABC-TV. The aviation western series would make iconic 1950s stars of its leads (above left to right) Kirby Grant Gloria Winters, and Ron Hagerty.
(Above: A 1953 ABC promo for Sky King and other ABC Saturday Morning TV Series)
The TV Version of "Sky King" was to be a replacement for "The Magic Slate", another children's series sponsored by Swift Foods Peter Pan Peanut Butter.
(Above: Radio ad at the end of Mutual's "Sky King" for TV's "The Magic Slate" another program, sponsored by Peter Pan Peanut Butter).

Posted by Archivebuilder at 8:44 PM No comments:

The Hook: If considered a superhero-themed show, Thunderbolt would be the second or third superhero program in TV history after "Adventures of Superman" with George Reeves.

Thunderbolt the Wondercolt was a children's puppet TV series about the adventures of a horse with a super-powered secret identity. It aired weekday afternoons on station KTTV from Los Angeles, California from 1953** - 1955.

Thunderbolt is extra unique as a spinoff from animation legend Bob Clampett's Emmy-winning "Time For Beany series. That meant satire to pull in an adult audience just as "Beany" had pulled in Albert Einstein. From review articles in Los Angeles newspapers the series was popular during its short run, and it is unfortunate the so few of the Clampett puppet shows are available to the public today.

An overlooked aspect of "Thunderbolt" is that it debuted on Wednesday, June 3, 1953, less than a year after "Adventures of Superman" with George Reeves. This makes it a contender for TV's second superhero series (3rd if "The Lone Ranger" with Clayton Moore counts.

If this claim is over the top, since it is a satirical puppet series, Thunderbolt could at least be considered the TV's first super animal.

Sources:
**Broadcast dates are based on newspaper TV listings of station KTTV from The Los Angeles Times. While the Internet Movie Database (IMDB) lists the show as starting in 1952, the following articles list Thunderbolt as a "new creation" from Clampett.
Ames, Walter. "Star Studded Palsy Show on KECA Tonight; Thunderbolt The Colt Is New Puppet Hit". June 5, 1953.
T. V. Tops. "To Be Seen and Heard". June 8, 1953. San Bernadino County Sun. https://www.newspapers.com/image/49399034
Posted by Archivebuilder at 7:00 AM No comments:

When a classic kid's TV show from the Golden Age of Television is lost or missing, it is hoped that footage or any visual of a program may exist in promos within other broadcasts.
I really hope to find promos for ABC-TV's "Acrobat Ranch" and "Animal Clinic", TV's first Saturday Morning shows for kids. Those programs debuted in 1951 70 years ago this summer. One complete episode of the former is archived and has surfaced online, while "Animal Clinic" is not listed in a searchable library/archive. So far I have found a promo from a few years later.
(Above) 1953 ABC Saturday Morning Promos - Space Patrol, Sky King, and More"
This slide promo for ABC-TV Saturday Morning programs aired Friday, February 13, 1953 in the opening of the "Tales of Tomorrow" episode "Another Chance" with Leslie Nielsen. The announcer implies that the parents tell their sleeping children not to miss the ABC programs to air the next morning, Valentine's Day 1953. Did the network air a version of this promo earlier in the day that was before a child's bedtime?
This promo includes visual slides for the following programs.
1) "Scouting In Action" - I have not found a lot about this series except that it may have originated in Chicago in Summer of 1951 and aired nationally a year later. It is a forgotten series in the history of children's television. Any info on this program is appreciated.
2) "Rootie Kazootie Show" is a well-documented puppet program with one episode on the Children's Media Archive YouTube channel: https://youtu.be/fPjEC5cqk8A
3) "Space Patrol" was a classic early space opera with Ed Kemmer as Commander Buzz Corey. Of all the 1950s kid's space shows, it is considered the best all-around. Also heard on ABC radio with the same cast.
4) "Sky King" is a fondly remembered aviation/western adventure series with Kirby Grant, Gloria Saunders, and Ron Hagerthy. It was based on an ABC radio series that debuted in 1946.
5) "Hail The Champ" was a 1950s Chicago game show hosted by Howie Roberts and Angel Casey where kids competed in fun athletic games for prizes. Decades before "Double Dare" this was Nickelodeon before Nickelodeon. One episode exists in the UCLA Film/Television Archives.
The search for rare kids' shows, and promos will continue. If you know of a promo for a rare kids TV show from 1941 - 1960, please leave a comment or write to archivebuilder@gmail.com with "TV promo" as the subject heading.
Posted by Archivebuilder at 6:00 AM No comments: 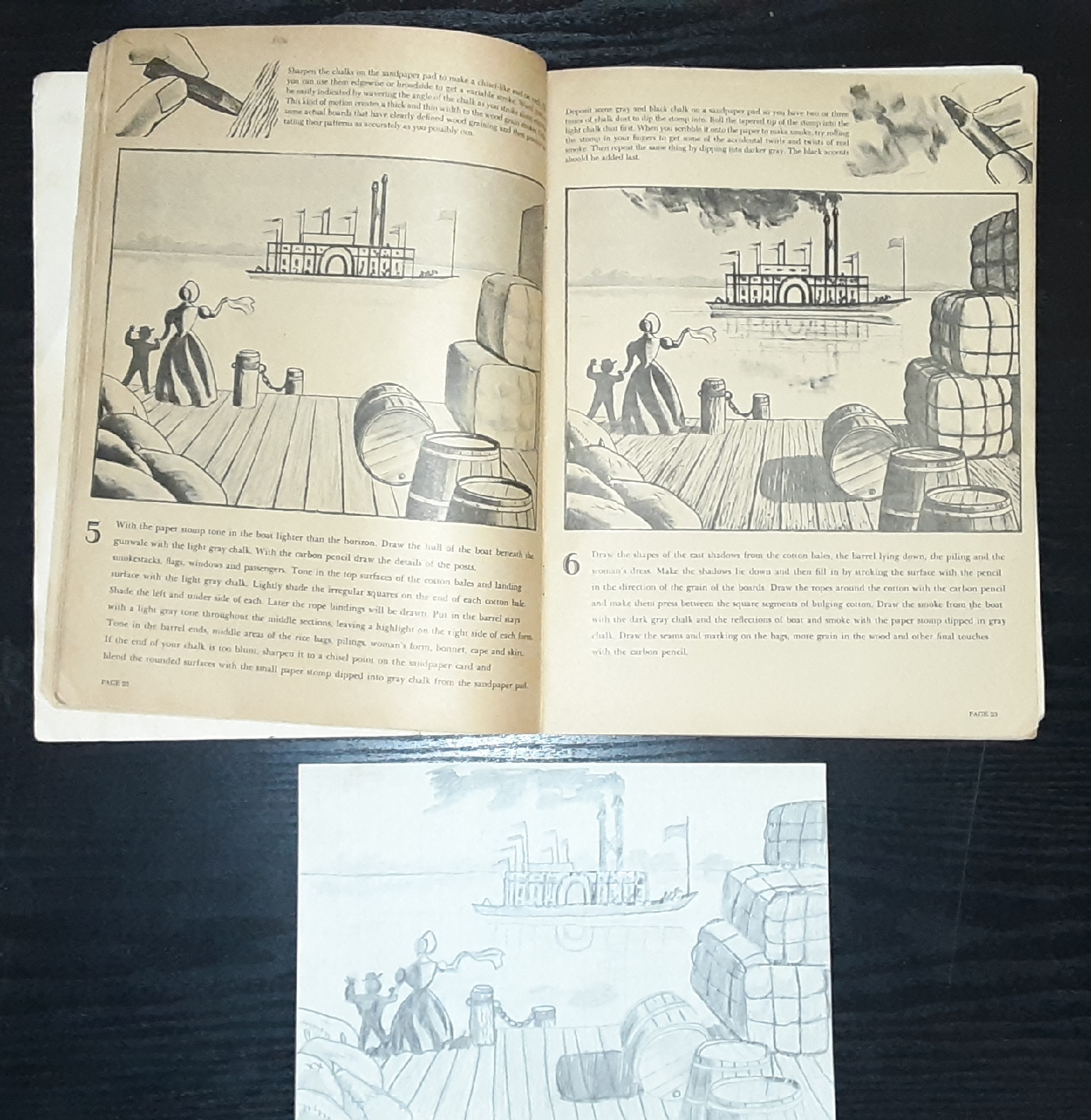 Another great thrift store find is this 1950 edition of "Learn to Draw" by Jon Gnagy America's first television art instructor. What makes this worn copy so special is that it includes artwork based on Gnagy's instructions. The name "Emma" is written on the top left cover in pencil and we can assume these were her sketches. Other drawings in this book included a portrait of a dog and a colored picture of a bird. 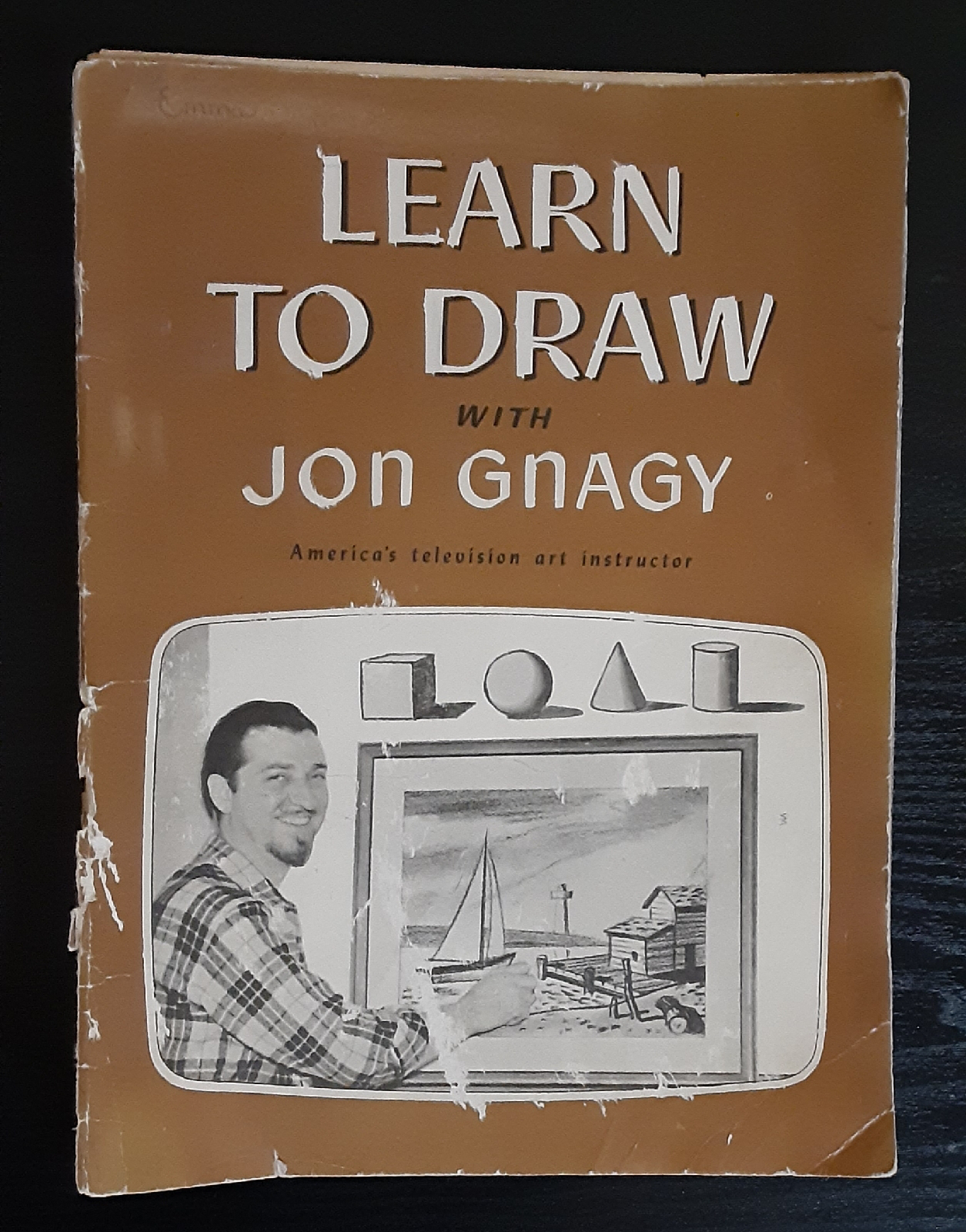 2021 is the 75th anniversary year of Gnagy's first appearances on television (May 13, 1946). According to some television histories, Gnagy's program could be considered the first children's program on regular broadcast television. This may be true for the post-war period when television finally began to captivate the masses. Gnagy's program "You Are An Artist" (1946-1950) predated NBC's "Campus Hoopla" (1946-1947), a teen dancing program, by seven months. 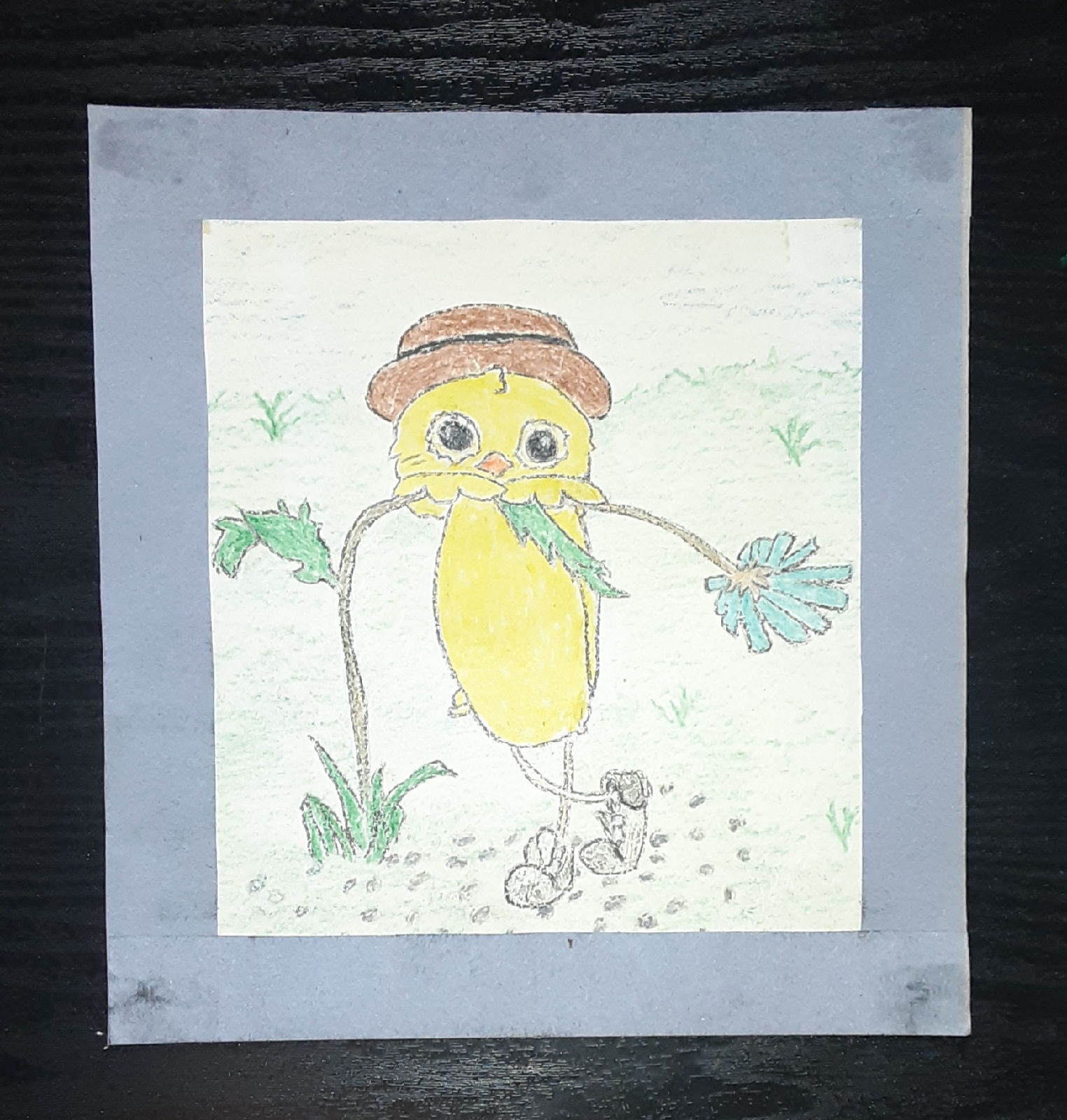 Whoever "Emma" was, she showed promosing talent. She was most likely a young girl born between 1930 and 1945. This copy with Emma's art was found in the Piedmont Triad region of North Carolina.
Posted by Archivebuilder at 9:10 PM No comments:

Email ThisBlogThis!Share to TwitterShare to FacebookShare to Pinterest
Labels: Jon Gnagy, You Are An Artist (TV Series 1946 - 1950)

Lost children's puppet shows are a research speciality of mine and something I will be writing more about in the coming months. One puppet series that has intrigued me for years is "Gigi and Jock". It is one of those puppet series from TV's golden age where information has been so scarce over the years, one wonders if the series ever existed. Here is what I could find about this lost puppet series.

"Gigi and Jock" was an adventure series about two "unusual puppets" created and filmed in France, with American voices dubbed in for the soundtrack. It is unknown if this series was originally a French TV production. The series was promoted in the Feburary 1950 edition of Billboard. From newspaper listings available in digital collections, the series aired on at least two American TV stations, the first being KTSL - Channel 2 Los Angeles. On station WENR Channel 7 in Chicago, "Gigi and Jock" was sponsored by "Flavor-Kist Cookies and Crackers" a product of the Schulze & Burch Biscuit Company. A few of the episode titles included "Magic Wand" and "Kingdom of the Birds".

Based on available publicity articles, "Gigi and Jock" featured Colleen Collins, a local singer and voice actress as the voice of "Gigi." Marian Richman (1922 - 1956), a cartoon, radio, and TV actress with a voice acting range to do young babies to grandmothers, was the voice of "Jock." While portrayed by Collins and Richman, Gigi and Jock appeared to be stout French men in existing publicity images, possibly outcasts from the Foreign Legion. In one article, animation voice legend Daws Butler (Time For Beany, Yogi Bear) was credited with all additional voices on the program. One article credits Butler as one of the lead characters, so it is hard to determine with certainty who played which characters.

A 1954 Variety listing claimed that "Gigi and Jock" had 39 1/2 hour episodes. In this research, no TV schedule listing for this series was found after March of 1951 and no reference in a TV syndication directory after 1955.

Prints of two episodes do exist in the David Susskind Papers and the University of Wisconsin. collection. Hopefully, one print of this show will also surface on DVD, streaming, or YouTube.

*Some grammatical corrections and one link update were made to this text on September 26, 2021.

Posted by Archivebuilder at 6:00 AM No comments: 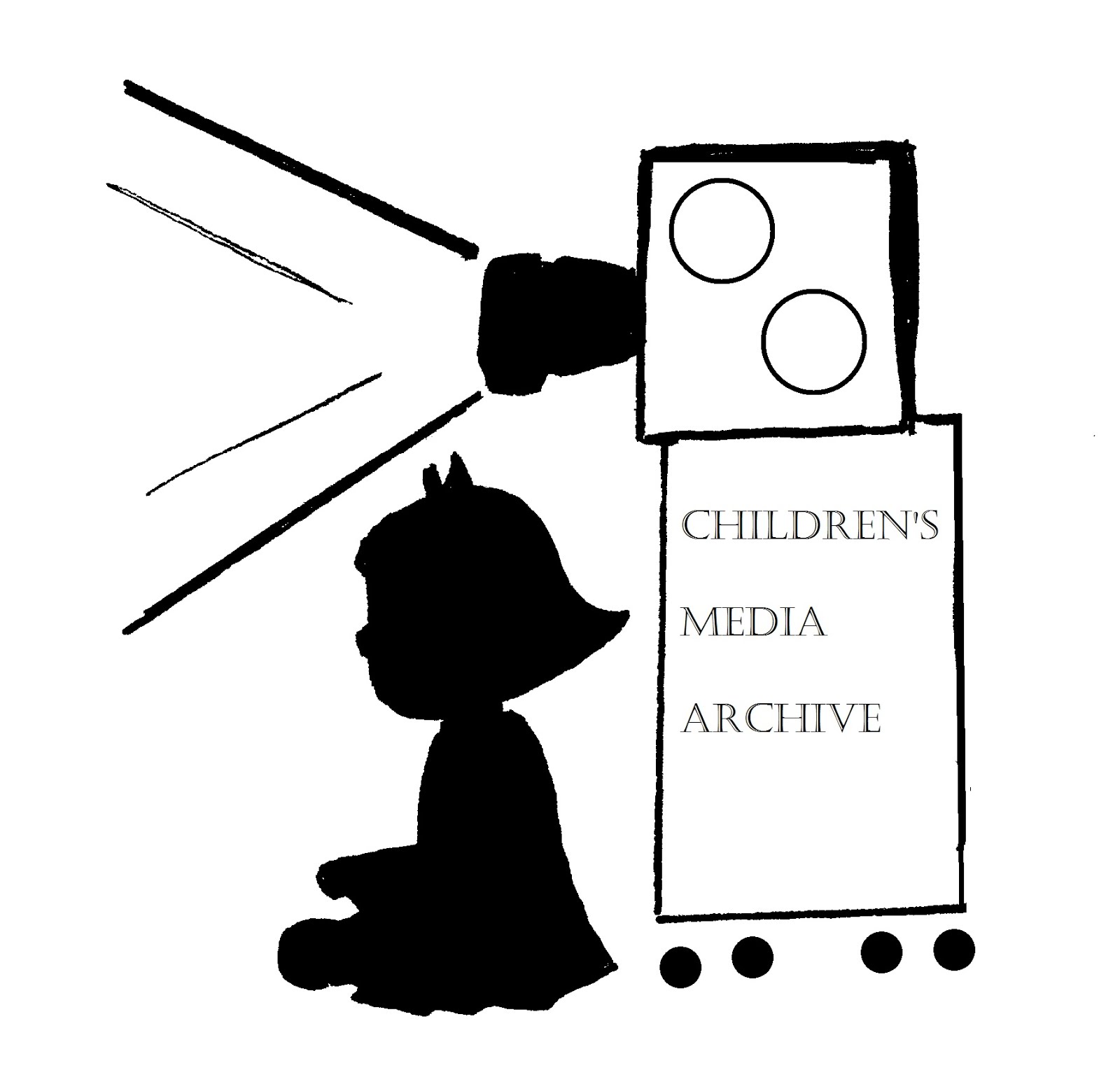